BC Hydro May Fund Construction of School in Coal Harbour

BC Hydro proposes to fund new schools and park upgrades

One of the projects that could be funded with BC Hydro’s Seed proposal is a renovation of Emery Barnes Park in exchange for the park board leasing the land to the BC Hydro so that they can build a substation underground.

Vancouver could receive funding for two new schools and several park upgrades if local policymakers approve BC Hydro’s proposal of funding community amenities in exchange for a lease agreement that would allow it to build two underground substations in the downtown area.

The city centre’s demand for electricity is projected to grow by more than 75 per cent in the next 30 years and two aboveground substations will soon be de-commissioned due to age, according to a BC Hydro release. Meanwhile, the Vancouver School Board has said it intends to ask for provincial funding for at least two downtown schools to meet enrolment demand in the coming years.

The so-called “Seed” proposal, which would see the electricity provider paying for park upgrades and schools, is the first of its kind in North America, according to BC Hydro.

It’s a plan that could work if all stakeholders, including the public, are fully consulted, said Park Board chair Michael Wiebe.

“They are talking about threading the needle. If all the pieces fall into place, this would be a great win-win.”

He says the board wants more details from BC Hydro, including information about financial return and health concerns of building a substation in a densely populated area. The proposal would fund a “refurbishment” of Yaletown’s Emery Barnes Park and to-be-decided lump sum that the park board could use to build new parks or community centres. Wiebe confirmed the deal would be worth “tens of millions” of dollars.

Another large project listed in the proposal is the construction of substations under new schools, which would satisfy the region’s power needs while creating more classroom space for children in the West End and Coal Harbour.

A Coal Harbour school could be built by 2020 and a West End school, next to the current Lord Roberts Annex, in 2025, according to BC Hydro. The substations underneath would be built at the same time.

When asked how much money BC Hydro was offering in total, a spokesperson told Metro it was too early to say.

The new West End school would replace the aging Lord Roberts building, the school board confirmed.

BC Hydro says it needs to build two new substations in downtown to meet the region's growing demand for electricity.

One of the first changes Vancouverites could see as a result of the proposal, if approved, is a complete facelift for Cathedral Park, which was built on top of an underground substation.

That substation is the first underground site in North America, according to BC Hydro.

Both the park board and City of Vancouver are encouraging residents to participate in BC Hydro’s consultation process.

“The City is very interested in the public’s input on BC Hydro’s proposal, and encourages residents to participate in BC Hydro’s engagement process,” a spokesperson told Metro in an emailed statement.

BC Hydro is accepting public feedback on the proposal through an online form and open houses until Feb. 28.

The park board and school board will vote on the proposal on March 27th.

The government of B.C. has increased its homeowner grant threshold from $1.2 million to $1.6 million — a 33 per cent increase.

The province says the increase will ensure that most homeowners who received the grant in 2016 will qualify for it again in 2017.

According to the release, 91 per cent of B.C. homes will remain below the new threshold despite recent steep increases in values from B.C. Assessment.

The province says 83 per cent of Metro Vancouver homes are below the new threshold.

David Eby, MLA for Vancouver Point Grey and housing critic for the B.C. NDP, says the move is another stop-gap measure from the government.

"They're reacting to patch things up two years too late, and it's a giant mess," Eby said.

Eby said that, though the on-paper wealth of many B.C. homeowners has skyrocketed in recent years along with home prices, so too have taxes and other associated costs.

The result, he said, is a lot of financially-strained families who have no way of accessing that value without selling and moving.

"The idea that there are all these really rich homeowners that are somehow leeching off the system is a bit of a fiction," Eby said.

The homeowner grant reduces property taxes on the owner's principal residence. The basic grant is worth up to $570, or up to $770 if the home is in a northern or rural area.

Additional grants are available for seniors, people with disabilities, spouses of veterans and those who qualify as low income.

Horseshoebay, a new development by Westbank promises to modernize Horseshoe Bay while respecting its inherent beauty and the natural contours of the hillside.  The project is being offered first to locals before outlying buyers. It is designed by one of the West Coast's notable architects, Paul Merrick.  The property will feature a wonderful boathouse at its waterside entrance.  Villas are: oceanfront, bay view, forest or cherry blossom outlooks.  There are also ocean "pavillion" villas. 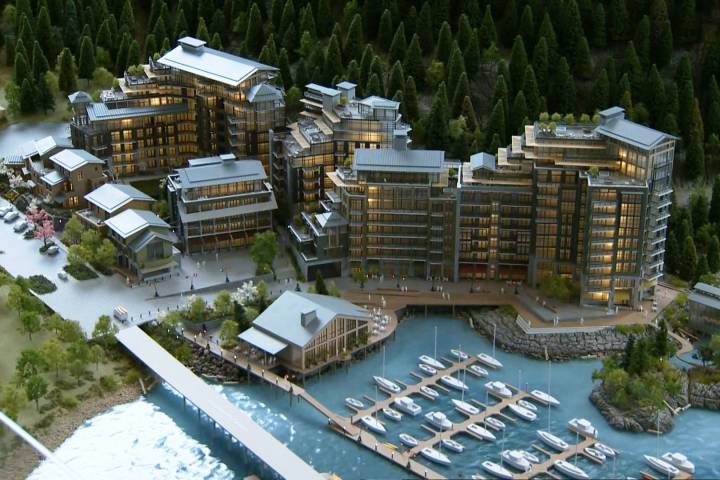 December Stats from Real Estate Board of Greater Vancouver